Now that is a huge contribution to all of mankind.  Very cool. 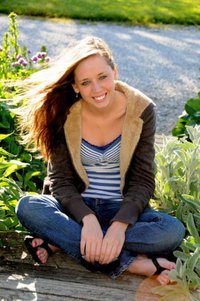 I’m pretty sure this falls under the heading “Things A Man Wouldn’t Write About”, but the story is compelling, and this information should be shared far and wide.  Last summer, a young woman named Amy Rae Elifritz died of Toxic Shock Syndrome as a result of using tampons.  Years ago, there was an outbreak of deaths from “Rely” brand tampons, which were made of polyester fibers and designed to hold more fluid.

If you have daughters, take a minute and look over the brochure in the link above, it offers important information that just might save a life.  I’m always in awe of people who are able to turn personal tragedy into advocacy.  Go visit You Are Loved and help get the word out. 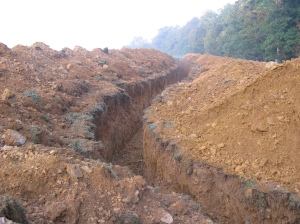 Broke ground yesterday.  By the close of business today, I will have 900 ft of trenches dug, 6 feet deep and three feet wide.  The next step is to lay out the pipe that carries the secret magical fluid back and forth from the house to the far reaches of our back pasture.  The “system” is then pressure tested, and if all goes well, then we begin back-filling on Thursday.  Bostonians are sissies.

Not exactly, though how I wish it were so.  When I read this story, I actually felt elated, the possibilities of crowd sourced projects are limitless.  To me, this is further proof of a collective consciousness at work.  Yes, scientists and researchers laid the foundation for this, but the “gamers” (to mix a metaphor) put the ball in the end zone.  Those lonely, socially backward cheeto eating losers living in their mother’s basement contributed to a remarkable and useful project, one that may ultimately save millions of people the pain and suffering of AIDS, Alzheimers, and a host of other human afflictions.  Someone once said his computer was merely a more efficient porn delivery system, which is funny, but nowhere near accurate.  I love the idea that ordinary people who lack credentials but not imagination and determination were able to contribute.   This gives me hope.

So much catching up to do…

First, (and most important) the colony of yellow jackets that attacked me has been eradicated.  My friend Bob actually found the dime sized hole leading to their nest, and a little gasoline and a lighter did the rest.  I found closure in the experience.

Okay, so I have a slew of emails asking about the geothermal project:  We break ground tomorrow.  I sectioned off a bit of pasture, and built a large holding area using round pen panels, and today I’ll be taking down a section of fence to allow the back-hoe to dig unfettered.  After the first trench is dug, the pipe is lain (layed?) from one end to the other, which leads to a common collection point.  This is repeated three times, then we dig one trench leading to the house.  The unit itself should go in towards the end of the week.  I’ll see what I can do, video-wise.

The Primary Wife had to drop everything and haul ass to Atlanta, as her dad needed surgery right away to fix some heart ailments.  I get grouchy when she is on the road.

I got my ass handed to me Sunday on the course…but the pain of that beating was lessened by watching the Titans kick the shit out of the Ravens.  Hasselbeck did well, and I think he is a good fit while Locker learns the ropes. but the real story is the defense.  Keep it up, fellas.

I can be such an idiot…I drafted Cam Newton but didn’t start him either game.  I felt sure the Green Bay defense would baffle the young QB.  The Panther’s lost, but Newton amassed 24 points.  Sigh.  My oldest son whipped me pretty good this week in our fantasy league.

I’m not writing about politics right now…there is really no reason to do so.  Primaries are a circus to be sure, but pearl clutching over every stupid thing a candidate says in one isn’t my style.  Besides, I’m really more interested by efforts to do something meaningful, and I’m intrigued by this project more than I can say.  A problem we can solve.  How often do we hear that?

I believe Fall has arrived, we are just starting to see the leaves turn, and it’s been all blustery this week.  The wasps are flying low and slow, and so are easier to smite with my guitar shaped flyswatter.  Smiting, btw, is often not given it’s due.  I shall do more of it in the future.  God must have a great deal of discipline to not do more of it.

Back soon, I promise.

So, it’s been hot here for weeks, hot and dry and just unpleasant as hell.  Then we got two and a half days of rain, which knocked down the dust and pollen and more than a few leaves.  I decide it would be a good time to catch up on mowing the hills that surround the lower half of the property.  About an hour or so into my job, and with Concrete Blonde blaring from my headphones, I feel a sting on the back of my head.  Now, when I mow, I can count on the occasional bee or wasp sting, usually they fly into me and just bounce off.  Suddenly, I feel another sharp pain near my left eye.  Then another.  Then another.  Before I can make sense of it, I covered with yellow jackets, and the little cuties are attacking me with biblical ferocity.  I ran.  They chased.  One hundred yards later, I call the house to have the Primary Wife pick me up…I can barely see and my face hurts so much I’m afraid I might pass out.  She gets out of the truck, and is promptly stung.  They are embedded in the collar of my shirt, the pockets, under my belt, and under my baseball cap.  We drive up to the main house and start stripping off our clothes like teenagers at an ecstasy party.  The doctor gave me two shots and advised I stay clear of yellow jacket nests.

My hands and face still feel like I’m on fire.

This morning, I took my good eye down to the scene of the crime and the sumbitches are still swarming.  I think I know where the nest is now, and I’m planning a little diesel fuel party tonight….